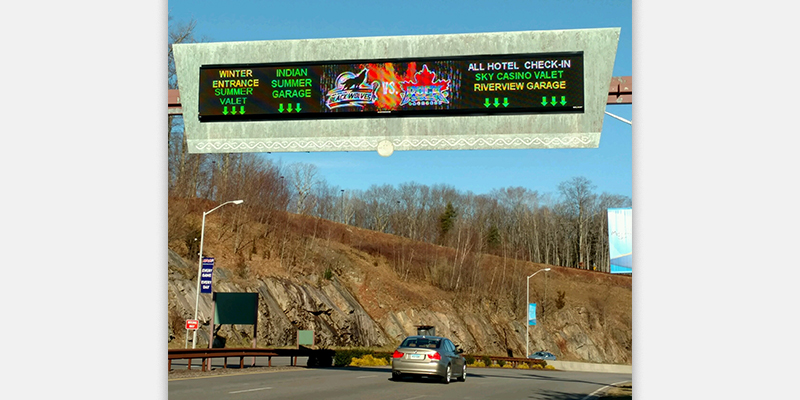 McPhee Advanced Technologies Group (MATG) has recently combined forces with Native Sons, Ltd (NSL) and has been awarded a contract to perform the replacement of twenty-two (22) electronic video messaging and directional transportation displays on the Mohegan Sun reservation in Uncasville, CT.

The project scope first developed in early 2014 when representatives from Mohegan’s Transportation Department reached out to Native Sons in an effort to have repairs made to the existing displays along the boulevard and adjoining roadways. The contractor that had been providing service to the displays in the past lacked the necessary training and experience to perform the complex troubleshooting and identification of the LED displays control components and the series-enabled fiber optic infrastructure that encircles almost two-thirds of the casino’s roads.

NSL and a few of the service technicians from MATG worked together to perform the necessary repairs to the various displays. Shortly thereafter, MATG was engaged by Mohegan to perform a systematic assessment and evaluation of the displays. This analysis also required review and documentation of the fiber optic system and its components. The final conclusion was that the circa 2002-2008 displays were at their end-of-life and a reservation wide replacement was in order.

As an Authorized Service Contractor for Daktronics Corp of South Dakota, the McPhee Advanced Technologies Group team was well versed in the new LED display technologies and were able to provide a cost-effective solution for replacing the over-the-road, side-of-the-road (blade) and open/close signage.

One of the biggest obstacles to this project was the elimination of the series fiber optic topology (in & out of each display) and the install of a new star topology (direct connection to each display). The MATG design team was able to propose an infrastructure that was based on not only the four new displays but also provide fiber optic strands at strategic locations for future replacements.

ABC Sign of Shelton, CT has been engaged to perform the removal and replacement of the displays.

Scheduled completion for this project is June 2017.